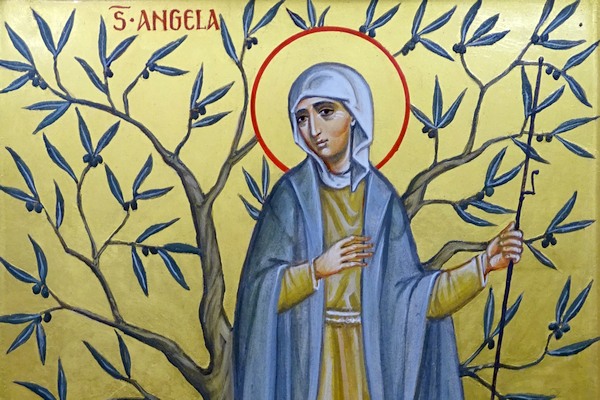 Blessed Angela, fruitful olive in the house of God, pray for us 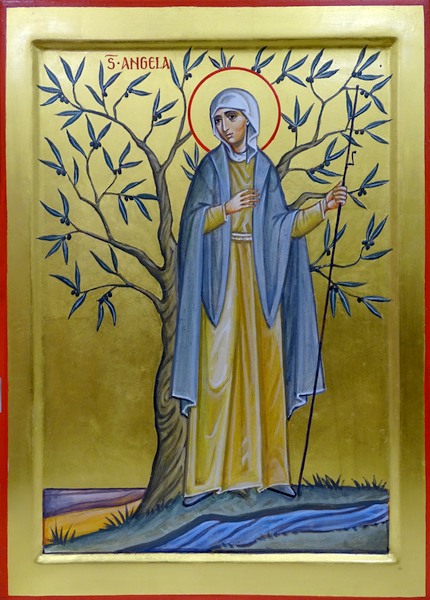 I want to share with you this new icon of St Angela, by the Italian iconographer, Paolo Orlando, which draws on an 18th century invocation – ‘Beata Angela, oliva fructifera in domo Dei, ora pro nobis.’ … ‘Blessed Angela, fruitful olive in the house of God, pray for us’.

In reflecting on his work, Paolo Orlando comments on the place of the olive tree in human symbolism throughout the ages, as well as its significance in biblical literature. He highlights the centrality of the oil of the olive in Christian liturgy and especially in the Sacraments, through which it signifies and imparts the power of the Spirit; how the olive tree thus ‘becomes a plant capable of communicating the sacred.’

As I contemplate the icon, I see Angela as a woman grounded in the same earth with the olive tree, refreshed and nourished by the stream of water which gives life to the tree. The tree has many branches, and, if you look carefully, you can see plump fruit developing on each branch. While she is grounded with the tree, Angela is not static; with pilgrim staff in hand it seems she will move on. And, having drawn refreshment, she is, like the olive tree ‘capable of communicating the sacred.’

The olive tree, its fruit and its oil, carry so much symbolism … in various contexts they speak of peace, strength, faith, victory and honour. They are associated with nourishment and healing. The olive tree is resilient, able to survive harsh climatic conditions, generous in the abundance of the annual harvest. Olive trees seem to grow well in cultivated orchards or alone on hillsides. All of this symbolism so simply depicted in the icon offers us renewed insight into the gift that Angela is for us and for our world.

So why speak of these things as we mark our important days in November – Foundation of the Company on 25th November, and Roman Union Day on 28th November?

Angela’s impact on the world, has extended so far beyond the small group of women who joined her in the Company on 25th November 1535 in Brescia. Angela’s spirituality, her understanding of her relationship with God, her insight into what it meant in her time to live as a woman of deep faith, yet strongly connected with her society, have shaped the life of so many people for close to 500 years. Remembering the origins of the Company reminds us of Angela’s extraordinary fruitfulness. To be fruitful is to be life-giving. We can be confident to ask Angela to help us to be life-giving in the way we live our faith and commitment strongly grounded in and responsive to the needs of our diverse cultures and societies. We can call on her to be with us as we strive to ‘communicate the sacred’ in our times and places

Saint Angela, fruitful olive in the house of God, pray for us.

The Ursulines from around the world who gathered in Rome in 1900 made courageous and inspired decisions which led to the formation of the Roman Union. These decisions have also been fruitful, life-giving in ways which I suspect exceed the imaginations of the sisters involved at the time. Think of the life we draw from each other now, in our diversity. Think of the parts of the globe where Ursulines are now present, witnessing to the Gospel. Think of the ways in which we connect across provinces, the missions and ministries that are possible because of our desire for global community. Think of the networks of Ursuline colleagues, friends, schools which are possible in this technological age. Think of the ways in which we often connect for prayer, for meetings or important conversations, either in person, or these days, technologically. Through all of these interconnections and the support we offer each other, how do we ‘communicate the sacred’, as Angela did?

Saint Angela, fruitful olive in the house of God, pray for us.