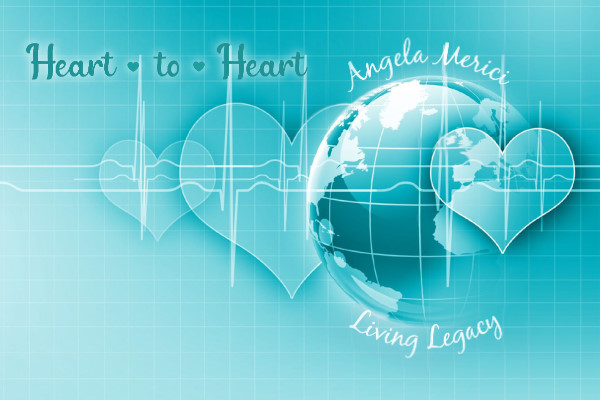 This issue of Heart to Heart focuses on how St. Angela’s legacy is lived today
in our efforts for Justice, Peace, and the Integrity of Creation.
Members of the JPIC team for the USA Roman Union Ursulines share their passion and commitment for responding to the “cry of the earth and the cry of the poor.” We begin with these words from Sr. Sue Flood, OSU, an Australian Ursuline who is currently serving in Rome as the general leader of the Roman Union Ursulines. Her reflections were part of an address given in September 2021 at an international meeting of Ursuline Sisters.

“In 1971 the Synod of Bishops issued the document Justice in the World which stated that ‘action on behalf of justice and participation in the transformation of the world fully appear to us as a constitutive dimension of the preaching of the Gospel, or in other words, of the Church’s mission for the redemption of the human race and its liberation from every oppressive situation’ (#6). [This] shaped my understanding of mission and ministry and of my commitment not only as a Christian, but as a professed religious woman, as an Ursuline sister. A commitment to action for justice was clearly not an ‘optional extra,’ not just a voluntary activity I could become involved in when I finished everything else. It was central to my living and sharing the Gospel, just as it had been central to the life and mission of Jesus.”

Reflections from the JPIC Team

The “North Country” of New York State is where I have most deeply experienced “the cry of the earth and the cry of the poor.” As I lived and ministered there for over 20 years, it was truly home for me. Its landscape is one of farmland, small towns, lakes, mountains, and undeveloped space. The beauty is breathtaking, but it also knows the ravages of natural disaster. Many live in poverty, often hidden, but there is a deep sense of belonging and caring. Economic growth is stagnant, but the outreach to care for and provide for one another is ever present. Young people often long to return with their families, but economic opportunities are scarce.

My own journey eventually led me to be involved with a nongovernmental organization (NGO) at the United Nations. During this time, the UN was developing its Sustainable Development Goals. At the same time Pope Francis’ Laudato Si was published. At every meeting I attended, reference was made to Laudato Si. The pope was the moral force calling our global world to the vision and action needed in our world for future generations.

My years in the North Country, my travel opportunities to Guyana, El Salvador, Thailand, Cambodia, and my time at the UN impel me to hear these cries and work with our JPIC team to educate, integrate, and implement the Laudato Si Platform.

St. Francis of Assisi called all creatures, no matter how small, “brother” or “sister,” calling us all to care for all that exists (Laudato Si, #12). This reminds us of the importance of going outside (or looking out the window) and appreciating the beauty all around us in nature. The more we appreciate our environment, the more we grow concerned with the current situation. We have all become aware of environmental habits that we can adopt to do our part. In her last counsel, St. Angela tells us “for those who for God’s honor are united in doing good... what they do turns out well, because they have God and every one of God’s creatures in their favor” (#9).

My passion for social justice is integral to Angela’s charism. Angela was a peacemaker, a reconciler. Injustice exists when relationships are built on dominance. My journey began with the Vietnam War which aroused my
passion for the end of wars. No one comes out winning. Thus, I began speaking out in various ways. After college I returned to Montana and saw the 200 underground nuclear missile silos constructed in the midst of wheat fields (symbolic of Eucharist). What a blasphemy! I joined others at these sites demonstrating for peace. Later, when in Seattle, I joined with 7 others to cross the line at the Trident nuclear submarine base. Angela’s charism, I believe, calls us to resist the militaryindustrial machine in every way we can. I presently work with
women who have been abused in numerous ways – sexually and from domestic violence.

My first ministry was among Native Americans where I saw blatant racism. Again, a country that uses force leads to dominance, a feeling of superiority over people of color. My feminist perspective rapidly grew when I began working in a parish in the mid 70’s and personally experienced clerical male dominance to which there was no legal recourse as well as being told I was too outspoken and caused the problem. Once we personalize a situation, we fail to see the systemic underlying causes. Through a feminine lens I began to also see the rape of mother earth. War, racism, male dominance, clericalism, domestic violence, trafficking, environmental destruction are all interconnected – so today we speak of “integral ecology.” As a daughter of Angela and a disciple of Jesus I am called to continually act for justice, thereby recognizing the dignity of each person and of Mother Earth.

"Why?” That’s the answer to the question, “Why am I passionate about justice issues?” As a child I asked a lot of questions, especially about why things (unfair things) were the way they were. It was often my father who answered those questions and I truly believe his answers were invitations to change things or at least to try to change those things. That, and an education in Ursuline schools that encouraged looking into the challenges of our world and ways to respond to those challenges have directed much of my life. Something deep within me continues to hold the belief that most people do not want to do injury to others. Rather, they simply do not understand how their actions impact others. I have spent much of my life in education trying to help people see the interconnected-ness of all.

"Let your heart be touched by what touches the heart of God.” These words have always seemed compelling to me, making our option for the poor so important. Pope Francis says, “Earth herself, burdened and laid waste, is among the most abandoned and maltreated of our poor” (Laudato Si #2). Earth has fed us and cared for us and now is struggling in every way. The cry of the earth is the cry of the poor. The polluted plants and air, tortured
animals, defaced mountains and valleys, as well as millions of displaced migrants, our sisters and brothers, articulate this cry. St. Angela and St. Marie of the Incarnation both prayed, “In spirit I go round the whole world in search of those redeemed by the blood of Christ.” That means all our earthly kin. Can we join Angela, Marie and all our brothers and sisters who are heeding their cry?

Educated early on by Franciscan Sisters, I knew Francis of Assisi’s heart – wide open to all of creation as brother and sister. When I met St. Angela, I knew her right away as a woman of heart, drawing all to her and advising us to keep others engraved on our hearts. That’s why I entered religious life – to be a woman of heart. So that is the legacy I carry on.

One time someone told me a bit jokingly that I seem to draw in all the “odd ducks.” At first that hit me hard as negative, but then I realized that it was so right. Love and inclusion are at the heart of the gospel and at the heart of our Ursuline charism. That’s why I spend myself in justice ministry; that’s why I am so passionate about Pope Francis’ call to care for our common home, to hear and respond to the cry of the poor! Whatever I do, I try to keep enlarging the table – making room for all. Have you heard Carrie Newcomer’s song, Room at the Table for Everyone? That song says it all for me: our call as followers of Jesus and Angela is to soften our hearts and help create a new world where there is room at the table for everyone, the Beloved Community!

A few weeks ago, due to a family death, I was driving to Louisville, Kentucky with another sister (an Ursuline grad) and my daughter (also an Ursuline grad) to initiate and facilitate funeral, burial, and other arrangements. As we neared our highway exit in Louisville, I panicked. We knew no one and were clueless as to a trustworthy funeral home. “St. Angela, direct us, St. Angela, help us,” we prayed.

As we continued to drive, I saw a sign, “Sacred Heart, an Ursuline School.” My daughter yelled, “Mom, turn in there; they will help.”

We went into the school, identified ourselves and told the front desk our situation. Several women ushered us into an office, calmed our confusion and frustration, and presented us with the names of two funeral homes. On the wall was a picture of an older St. Angela with eyes reflecting, “It will be fine.”

Our five days were calm and orderly, though not complete, and were spent in gratitude for our Ursuline upbringing and connectedness, but, most importantly, in appreciation, honor, and praise of our guide and escort, Angela Merici: “May the strength and true consolation of the Holy Spirit be in you all, so that you can sustain and carry out vigorously and faithfully the charge laid upon you” (St. Angela, Prologue to the Counsels).

What from the above reflections most draws me or challenges me?

How am I being invited to live St. Angela’s legacy today through efforts on behalf of justice, peace, and the integrity of creation?

Listen to and pray with Carrie Newcomer’s “There Is Room at the Table for Everyone”:
https://www.youtube.com/watch?v=92OM5bdQ4N4