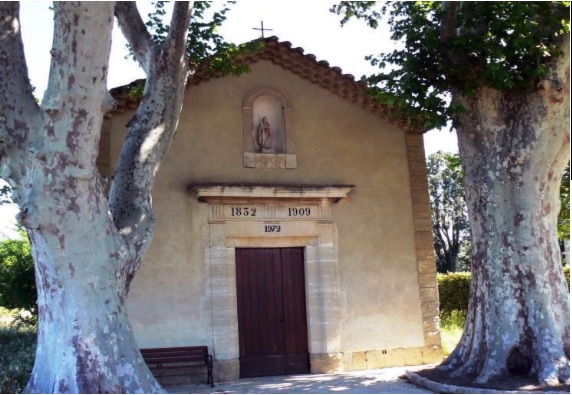 During the troubles of the French Revolution, 29 Sisters, expelled from their convents, found refuge in a house at Bollène.  During their eighteen months there, they shared their life of prayer and total poverty.  Arrested in April 1794 because they refused to swear the oath required by the city officials, an oath their conscience condemned, they were jailed on May 2 at Orange, in the Rectory’s prison, near the Cathedral, where 13 other Sisters were already imprisoned.
They organized themselves in a single community and consecrated the essential part of their time to prayer.  Condemned to die by the Popular Commission, then commanding in the actual Chapel of Saint-Louis, they were transferred to the ancient Theater, where they awaited to climb the guillotine erected in Saint Martin’s Court.  They all went up to the scaffold joyfully, singing and praying for their persecutors, who admired their courage :  " These  bougresses are all dying with laughter”!  Ten other jailed Sisters were saved by the fall of Robespierre on July 28, and liberated in 1795.
The bodies of the Martyrs were thrown in mass graves in the field of Lapolane (at Gabet), 4 kilometers from the town, on the edge of the Aygues River, and a Chapel was built there in 1832.

NB : In Orange, there were 332 executions during six weeks.

Thirty two of them were executed July 9 to 26 (16 Ursulines, 13 Sisters of the Blessed Sacrament, and 1 Benedictine)

Lord our God,
You have given to our Blessed Ursuline Martyrs of Orange the strength to overcome the trial of martyrdom :
grant us, through their prayers and their example, to be firm in our faith and fervent in our charity, so that we may share with them the joys of eternity.