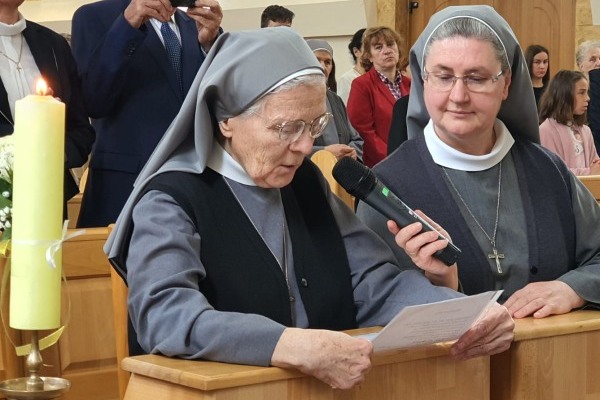 On Sunday, 6 June 2021 in Zenica - a city in Bosnia and Herzegovina in the parish of St. Joseph during a solemn Mass Sr. Ana Filipović celebrated three anniversaries: 75 years of life, 50 years of religious life and 25 years of activity in this parish.

The Eucharist was celebrated by the National Director of Pontifical Missions, Fr Luka Tunjić concelebrated by the parish priest Fr Davor Topic and three other priests from Zenica. In his homily, Fr Tunjić referred to the Bible readings from that Sunday, and congratulated Sr Anna for choosing to listen to and live by the word of God: "The altar servers, the youth, the priests, but also all the faithful of this parish know that Sr. Ana lives her religious vocation in modesty and humility".

After the prayers of the faithful, Sr. Ana renewed her religious vows which she took on June 1, 1971 in Varaždin. At the end of the Mass, Fr Davor read out the congratulations and the text of the Apostolic Pontifical Blessing for Sr Ana. Among other congratulators was Archbishop Vinko Cardinal Puljić and there were also words of thanks from the Generalate of the Ursulines for her religious service.

The youth of the parish also thanked Sr. Ana for a quarter of a century of activity in this parish: "I think the most important lesson we can learn from you is prayer and the witness of your own life. That is what attracts people, especially young people. Faithfulness, loyalty, patience, perseverance, fighting spirit, holiness. Sister Ana, these words best describe you”.

S. Ana Filipović was born in 1945 in Živinice as the fifth daughter in her family. She lost her father and mother very quickly. She worked for about 4 years in a furniture factory until she discovered her vocation and entered the convent in 1966. She took her first vows in 1971. She has worked as a religious sister in Zagreb, Gračani, Varaždin and Zenica. Half of her 50 years of religious life have been spent working here in Zenica, where she has become recognised for her modesty, humility and serene spirit.