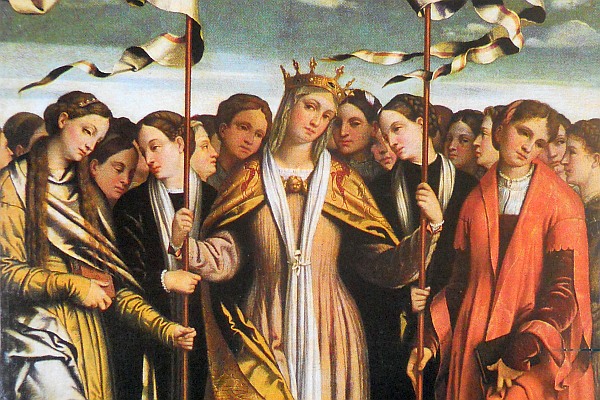 On 21 October, Ursulines throughout the world celebrate the feast of St Ursula the Martyr.

Each year as we celebrate the feast of St Ursula, I go back to reflect on some of the images with which we have become so familiar. In art work through the ages, Ursula is most often presented along with her companions – after all, this feast is that of St Ursula and her Companions.

Sometimes the artist presents Ursula as the strong leader of many women; we see this in the famous work of Moretto, artist of Brescia. Other representations show her as the protector and guard of women, as in the image by Hans Memling.

We have little factual evidence about Ursula, her life, or her companions. However, the tradition strongly supports the fact that she did not stand alone as she faced the challenges to her faith and her eventual martyrdom. Standing firm in her beliefs, she stood with others, both offering them strength and drawing strength from them.

Perhaps it was this aspect of Ursula’s story that influenced Angela in her choice of Ursula as patron for the early Company. Perhaps she wanted the women who formed this new community not only to be prepared to give their lives in total commitment to God, as did the early martyrs, but also to be strongly committed to, and even protective of each other.

Maybe there is some wisdom for us to draw from these ideas as we celebrate this special feast in 2021.