From 8 to 10 June, five Ursulines of the Roman Union took part in a Colloquium on Marie Guyart de l’Incarnation: « autrement moderne » Theological foundations and prophetic dimensions of a “life according to Christ” which took place at the Pontifical French Seminary in Rome: Sr Mariangela Mayer, Sr Angela Poggi, Sr Florence Marie Le Garrec, Sr Armi-da Veglio and Sr Marie Amélie Desmeulles. There were also several Ursuline sisters, mostly from France and Canada, who followed on line. They were three very intense days. In the introduction, Fr Vincent Siret, rector of the Seminary, explained that the organising group, the CUEG (University Circle of Guyartian Studies) has as an aim that Saint Marie de l’Incarnation be universally known and be proclaimed Doctor of the Universal Church.

We would like to share here some of our general impressions of the colloquium and then some points which particularly struck us from the different contributions.

“I was delighted to take part in the three day colloquium on Marie de l’Incarnation. All the excellent conferences enabled me to see her in a new light. I appreciated the connection made with other figures like Saint Paul, in the same apostolic spirit, or Teresa of Avila and the spiritual marriage….. This colloquium really made me want to immerse myself in her writings with, now, new lights and keys to reading and understanding them. It also strengthened my attachment to the one I truly consider to be a big sister and a model for my life of following Christ.”

“It is always an opportunity for me, even a grace, to deepen my knowledge of our wonderful Sister Saint Marie de l'Incarnation Guyart Martin. So it was with pleas-ure that I participated in the colloquium at the French Seminary in Rome and I was not disappointed. The speakers were all of a high level, not "professors" so much as "researchers", who encouraged us to go further, not to be satisfied with what we have learned, to leave the commonplace definitively for an exploration that will bring us closer and closer to the reality of Saint Marie de l'Incarnation. It seems to me that she has become more contemporary to me in the search for how to re-spond with "gentleness" and determination to the One who calls us to transmit to those who approach us the passion that Jesus be known, loved and adored by all those who are redeemed with the Blood of Christ.”

“During these two and a half days, we were immersed in the world of Saint Marie de l’Incarnation. Her relationship with God-Trinity sheds a special light for our life today in the twenty-first century. She is “mistress of the spiritual life” and can help us to enter into the mystery of God in a refreshed way… There is the testimony of Marie de l'Incarnation and … there is also the testimony of her friends! The speakers at the colloquium were certainly academics capable of very precise presentations, but they were above all friends of Marie de l'Incarnation, often long-time friends! ….. During one meal, Thérèse Nadeau Lacour shared, informal-ly, how Marie de l’Incarnation was present in her life and guided her through un-expected paths when she arrived in Canada. Gertrude Martineau explained how, as a student with the Ursulines, she saw an Ursuline sister reading the writings of Marie de l'Incarnation and “felt” that “what she was reading must have been beau-tiful”... how she understood it better much later, up to the point of writing an icon that she presented to us. Seeing the impact of Marie of the Incarnation in the life and mission of Cardinal Marc Ouellet, or of Fr Vincent Siret of the French semi-nary in Rome, and others were occasions for which to give thanks.” 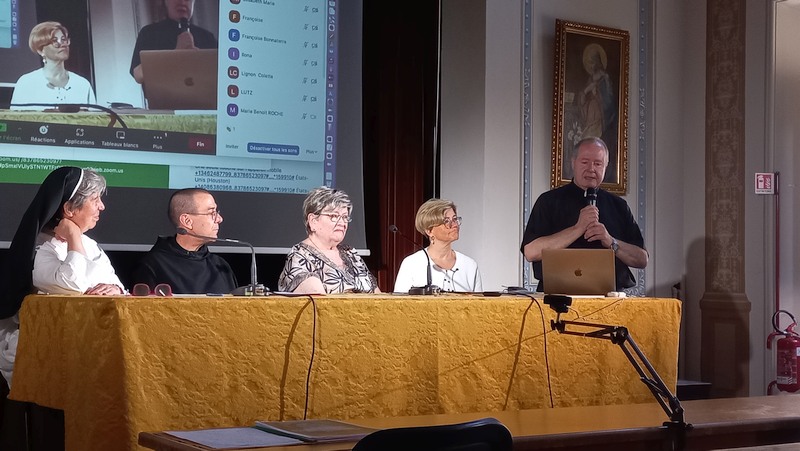 The subjects of the conferences were

The important dates of Marie de l’Incarnation – Philippe Roy-Lysencourt, Director of the Institute for the Study of Christianity at Strasbourg

The Pauline presence in the writings of Marie Guyart – Fr Matthieu Rouillé d’Oreuil, Director of Stud-ies at the French Seminary

Marie de l’Incarnation and the visions of the Trinity - Cardinal Marc Ouellet, Prefect of the Congregation for Bishops

The Church in the Relation of 1654 – Fr Roland Varin, formator at the SJMV Seminary

Marie de l’Incarnation: the spirit of Christianity - Thérèse Nadeau-Lacour, author and founding member of the CUEG

Round table: the Virgin Mary for Marie de l’Incarnation and for the Ursulines – Sr Alexandra Diriart and Sr Lise Munro osu

Marie de l’Incarnation and the gentleness of God – Hélène Michon, Lecturer at the University of Tours

A third party in the “régime épistolaire”: the place of God in the correspondence of Marie de l’Incarnation and of Mme de Sévigné – Isabelle Landy, Founding member of the Study Group of the History of the French Language and the International Association for the “Recherche sur l’Epistolaire”

Marie Guyart de l’Incarnation…and of the Redemption – Dom Thierry Barbeau, monk of Solesmes, has published several studies on Marie Guyart’s experience of the spiritual marriage and its double dimen-sion, unitive and apostolic; in collaboration with Fr Max Huot de Longchamps, he has just published a new edition of the Relation of 1654

Marie de l’Incarnation, missionary and mystic in the thought of Charles André Bernard – Marie Giovan-na Muzj, she teaches at the Gregorian University and at the Oriental Institute

Ignatian resonances in commitment - Louis Lallemant, Jean de Brébeuf and Marie de l’Incarnation – Fr André Brouillette SJ, he is professor of systematic and theology and spiritual theology in the School of Theology and Ministry at Boston College; he is a member of the scientific committee of the Centre for Studies of Marie de l’Incarnation at Laval University, Quebec

Marie de l’Incarnation and the ordained ministry of her son, Claude – Fr Vincent Siret, rector of the Pontifical French Seminary, founding member of the CUEG

The Pauline presence in the writings of Marie Guyart
I found fascinating the parallels established between the mission of Marie and that of Saint Paul. Fr Matthieu Rouillé d’Oreuil drew attention to certain characteristics of a missionary call which we see both in Marie and Saint Paul. A few examples:

This was a biblical aspect of the life and mission of Marie which touched me and has encour-aged me to look at it more deeply.

“I have very much present in my mind the words of St. Paul: “Jesus Christ died for all”. I see with extreme sorrow that all do not live for Him and so many souls are plunged in death. At the same time I am filled with confusion that I dare aspire and even to think that I am able to contribute something to help them find life.” Letter XII, to Dom Raymond, 1635

Marie de l’Incarnation and the visions of the Trinity
I was touched by the presentation of Cardinal Marc Ouellet in which, it seems to me, the Car-dinal gave a personal testimony, for example, Marie de l’Incarnation as a guide / companion for him in his intimacy with God. He quoted the song En ce Pays “Au centre de mon âme, il est un air si doux…” (At the centre of my soul the melody is so sweet)… and he emphasized the importance of the central place of the Trinitarian Life in our Christian life.

This icon was given to Pope Francis, who blessed it during the private audience for our group – those who were present in Rome.

Marie Guyart de l’Incarnation…and of the Redemption
More than once has the singularity of Marie Guyart in her mystical and apostolic journey been expressed. Dom Thierry Barbeau, Benedictine of Solesmes, presented among other things the Spiritual Marriage as "mystical arrival" and "apostolic departure". I was touched; I found my-self completely in our Ursuline charism: “contemplative – active”. The action that springs from the Love of the Spouse… Moreover, also our Foundress, Saint Angela, does not fit into a fixed plan.

Marie de l’Incarnation and the ideas of Pope Francis
“The points of resemblance between Marie de l’Incarnation and our Pope Francis were recalled by Cardinal Gérald-Cyprien Lacroix. Pope Francis names the evils of our time: self-referentiality, self-realization, … self-destruction (cf Laudato Si n°204, 206…). Marie de l'In-carnation warns her son against 'our wretched self-love...our self-love enslaves us and reduces us to nothing' (Letter LXVIII, to her son, 1643)... On several occasions during the colloquium, saints have been mentioned as antidotes against 'self…’ Today Marie de l'Incarnation can open a path for postmodern humanity in an identity crisis. Marie de l'Incarnation, through her life and testimony, invites us to revisit our life as baptized persons, to rebuild, to rediscover, to be reborn... By learning from Marie de l'Incarnation we deepen our path as 'disciple-missionaries'.”

The audience with the Holy Father
We were struck by his simplicity, and the depth with which he spoke to us from the heart! Pray! Live! May this faith that Mary bore be renewed by the testimony of our Life and of the Word.

“The Apostolic Prayer of Marie. "The souls redeemed by the most precious blood of my divine Spouse" – are they not here as much as in distant lands in the 17th century? Coming home in the evening, I saw most people fixed on their cell phones. I also opened mine at first. Then I closed it. I looked at the faces, and in my heart I began to present these diverse people in the bus in Rome "through the Heart of my Jesus".”

"I was very touched to see how Marie de l'Incarnation reaches and touches not only the Ursu-line family but a varied number of people, religious of various orders or lay people. A real encouragement to promote the modernity and the example of Marie de l’Incarnation for our soci-ety and our Church today.”

“Will we soon see Saint Marie de l’Incarnation as a Doctor of the Church? We hope so: it would be a great joy and motivation to know her more and more as our travelling companion.”