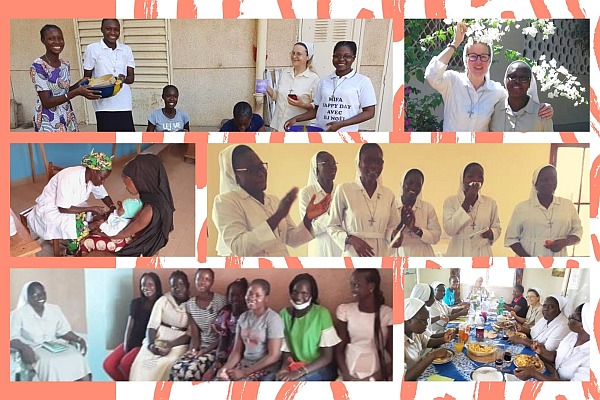 From Cameroon and Senegal, we join you with this new edition of our news. We wish you a better year 2021, good health and a lot of courage.

Here, in Cameroon and Senegal, the recommendations of caution remain in place. But for many people, it is first and foremost a question of survival, while the confinement and the months of curfews have drastically slowed down economic life, especially in the informal sector: merchants, tailors, transporters... The rainy season - or wintering - has however been an encouragement because the number and quantity of good rains has surprised us all. The crops have produced good harvests which have delighted the growers!

In Sandiara, the parish priest solemnly blessed the new house of the sisters on August 15th and then six juniors renewed their first vows. We give thanks to God for all that has been offered to us this year: we thank all those who wanted to take their part in our mission. The community of Sandiara has 5 members this year: Sr. Angelique Odette Mbaye the prioress, Sr. Mariangela Mayer, Sr. Christine Faye, Sr. Nanre Martina Selkap and Sr. Catherine Bob. We held the first meeting of the aspirants of our sector after this long period of confinement. There were seven of them. We shared on the joys and challenges encountered during these last months. They also expressed their resolution to walk with Saint Angela in the discovery of Jesus, friend and companion. On November 5 we went back to school for the beginning of the new school year for the teachers and staff. Sisters Christine, Catherine and Nanre Martina, together with the whole pedagogical team of Saint Charbel Makhlouf and Saint Angela Merici, worked hard to prepare the students for the beginning of the new school year on November 12. Our two schools have a total of 351 students. This new school year is marked by the reinforcement of the barrier measures to be respected in the schools for the safety and health of all. The overcrowding of our primary and secondary classes in the country does not allow the distancing that Covid 19 imposes on us. However, we insist on the wearing of masks, hand washing and other hygiene measures. Sister Angélique Odette has resumed her teaching at the high school of Sandiara. 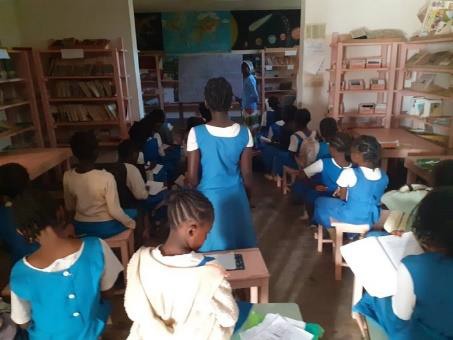 At Ngaoundéré, the community has had a new face since last August, with the presence of 3 Prepostulants and a Juniorist. We form a community of 9 people with a variety of apostolates. Sr. Asta, helped by a staff of 21 people continues to be in charge of the diocesan dispensary which receives about 1000 patients per month. There are many deliveries during the night and on average 80 women give birth there each month. Pauline, a trained nurse's assistant and pre-postulant, spends a good part of her apostolate there. Sr. Adriana, despite her great age, remains a loving presence. Elisabeth, prepostulant, gives catechism classes in the Elementary and Middle classes and runs the library. Marie Noël, also a pre-postulant, provides catechism classes at the Beginning, in the preparatory course and in the first year elementary course. Sr Rosette, after her success in the probationary period, began her classes in the German Terminale A4 class at Mazenod College. It is a special experience which invites her to a good life witness to continue to follow in the footsteps of our sisters who preceeded us: Sr Patrice Clifford, Sr Mirjam Surjan and Sr Timothy Pinner. Sr Marie kills several birds with one stone, Juniorist, member of the community, trainee at St Angela School and student teacher. 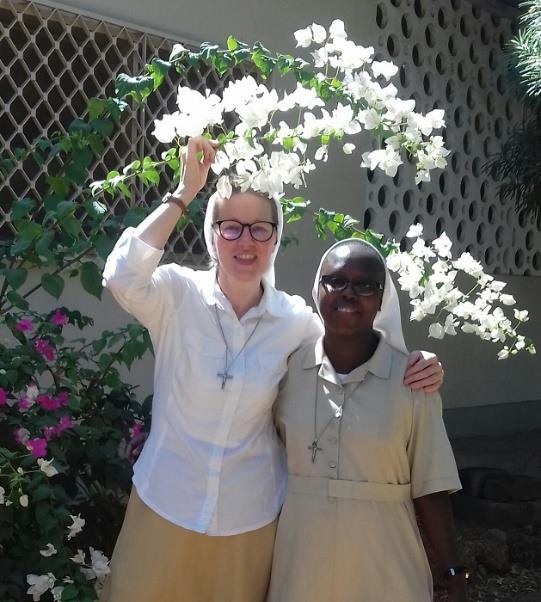 The community of Léhar has changed its face in recent months! After the months of confinement, Sr Dominika returned to Slovakia at the end of her year of inter-provincial service. Sr Agnieszka PIȨTA, from Poland, is the new member of our community. Sr Mado DIEME continues her presence in the community and her service in the primary school, in the CE1 class. A small group of aspirants come regularly to the community to visit us, to do manual work and to pray with us: we entrust them to your prayers! We have also started a new project: we have built a chicken coop and we want to start a small chicken farm to have some income for the community.

The community of Thiaroye has experienced many movements these past months with the vacations and the obediences. Sr Nanré left first to join her new community in Sandiara in July and then Sr Marie Noël, having gained good examination results, was sent to Thiès to continue her studies. Sr Georgette is at the Center for Pedagogical Formation (C.F.P.) in Mbour. We had the joy of welcoming our new Community Superior: 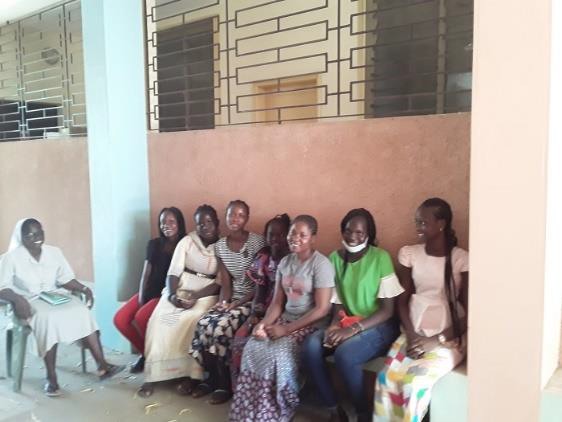 Sr. Paola Scarpin and two second year postulants Eveline and Jeannette. Sister Ksawera, returned to the community on November 6, following a two months absence for her vacation in Poland.  There has been no activity at the parish level because of COVID-19. Only the catechesis for the classes preparing for the sacraments was done in the CEBs (Basic Ecclesial Communities). The dispensary celebrated its 45 years of service to the sick on Monday, December 7: a true moment of communion, remembrance and thanksgiving to our Lord for so many graces received from its beginning to the present day.

On August 19 Sister Krystyna MŁYNARZ arrived at Thiès from Cameroon. She is now a member of our community and responsible for the novice and postulants. From September 18, the Ursuline Community rejoiced for the success of our Sister Marie Noël who, shortly afterwards, joined us to continue her studies in Thiès. 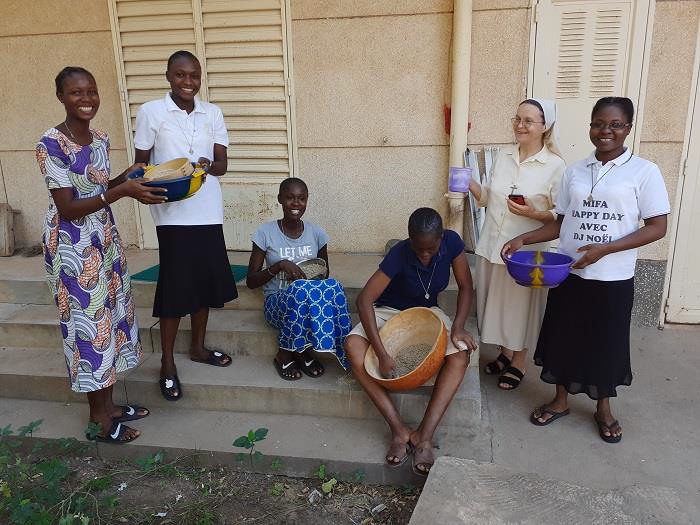 The month of September saw the BFEM (Brevet de fin d'études moyennes) exams take place - two months late! And it was on September 21 that we learned of the magnificent result of the Collège Sainte Ursule in Thiès: 100%! On October 1st, 2020, we celebrated the entrance to the postulancy of Germaine Mayé NDOUR who will now be with us. On November 12, the students finally started the new school year. The strong and pressing demand from parents led us to open 4 classes of 6th and 4 classes of 5th with a total of about 59 students per class. This year there are 757 students in 13 classes.

At the inter-postulancy, we are 66 postulants from 15 congregations. We have just finished a retreat from the 6th to the 11th of December. The theme of the retreat was "Playing the game". We saw how to play the game of corporality, the game of freedom, the game of faith, the game of relationship, the game of vocation and of discernment.

A year called "CANONIC" has gone, another called "APOSTOLIC" is coming, so many reasons to give thanks to the One who calls and forms according to his heart!
The courses of the Internovitiate of Dakar started again on October 13th, 2020 with the barrier measures in force. We began with the chapter on Consecrated Chastity and fraternal life in community. After having gone through the synoptics in the first year, we approach the Epistles of Saint Paul. We have a new subject, namely Sacramental Theology. Regarding sessions, there is one on communication, another on self-knowledge with a focus on the enneagram, and a third session on spiritual growth. We are moving forwards slowly but surely! At the moment I am preparing for the 30-day Ignatian retreat in Gandigal, which will be given to me by a Jesuit Father.

May this year that is on the horizon be for all of us and for our Institute a continuous march towards this New Life so longed for!