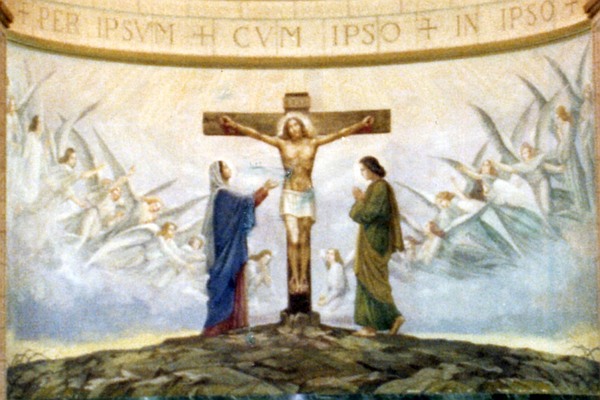 The paintings of the Generalate Chapel

Between 1936 and 1937, the Roman painter Mario Antonio Barberis decorated the Chapel of the Generalate of the Ursulines of the Roman Union in Rome dedicated to Christ the King. The mural painting rotated around the celebration of Jesus Christ's sacrifice and of the patron saints of the Order; the legend of Saint Ursula and the history of the Congregation since the foundress, Saint Angela Merici, until the foundation of the Roman Union. The archives keeps numerous documents that testify to this great undertaking: correspondence, reports by the artist, payment receipts, rough sketches and preparatory cartoons in natural size. The Chapel transformed from 1965 onwards, according to the prescriptions of the Second Vatican Council. For the most part the decorative paintings are lost, but we have proof of them; a significant number of coeval photos.

The project began to take shape in the early days of 1934. On 7 January, Mother Marie Vianney Boschet sent a letter to the Prioress General, Marie de Saint Jean Martin, setting out the iconographic programme she had in mind and naming the artist Mario Barberis for the first time (AGUUR, Ig 32/b, 1934, fols. n.n.). In another letter, also dated January 1934, Mother Boschet wrote to Jean De Lattre, the Jesuit priest who had already advised the Ursulines during the construction of the Generalate, confirming the general idea of the decoration: the Calvary towards which the two stories of the Order's patron saints were to converge (AGUUR, Gc, file 22, fols. n.n.).

Mother Vianney Boschet herself made two sketches of her idea in a letter to the Prioress General (figs. 1-2, AGUUR, Ig 32/b, 1934, fols. n.n.): the Calvary in the apse and the stories of the saints on the side walls. The decorative programme called for every surface of the chapel to be painted: the side walls, the vault, the triumphal arch, the apse and the apsidal basin.

In the apse was painted the scene of Calvary: Christ, between the Virgin Mary and St John the Evangelist, turns his gaze to the Eternal Father accompanied by the Holy Spirit, who stands in the apse basin and accepts his sacrifice. In the background, the painter has created a flight of luminous angels that converge towards the centre of the apse to link the earthly scene of Calvary with the heavenly scene of the Eternal Father; the symbols of the four evangelists stand out on the triumphal arch. (fig. 3, AGUUR, Gc, file 24).

According to the painter, the neo-Romanesque style of the chapel required pictorial decoration that adhered to the architectural layout; in fact, the decorative choices had not only an ornamental but also a symbolic function. The theme chosen is that of the "Vineyard of the Lord", the shoots and the vine (Jn 15:5); on the pillars are painted sheaves of wheat (Jn 12:24), which together with the symbols of the vine and the bunches of grapes represent the allegory of the Eucharist. At the base of the pillars was the candelabrum: a decorative and symbolic element signifying ardent and inextinguishable prayer.

he scenes of the Way of the Cross were painted on the basis of these pillars: over the story of the Passion of Our Lord Jesus Christ rises the redemptive and ardent prayer, before the symbols of the wheat and the vine that the son of God chose as transubstantiation of the divine body and blood (figs. 3-4).

In the centre of the counter façade, above the portal, St Peter's Basilica was painted in an ideal Roman countryside and, on its sides, two different landscapes introduced the processions of the saints: on the one hand the banks of the Rhine in Cologne, where St Ursula offered herself as a holocaust, and on the other the shores of Lake Garda, where St Angela Merici was born (fig. 4). Today, these wall paintings no longer exist. However, the processions of the saints remain.

On the left wall is the procession of the Virgin followers of St Ursula, portrayed in various attitudes: young girls kneel down to pick up a lily, gather together to pray, to invoke heavenly grace, to sing songs of praise to the Lord (figs. 5-8). On the arch of the side chapel, St Ursula is depicted in the glory of Paradise surrounded by a host of angels (fig. 9).

On the right-hand wall, on the arch corresponding to that of the side chapel, there is a scene in which the young Angela Merici, kneeling on the banks of Lake Garda, fixes her gaze on the vision of the celestial staircase traversed by angels (fig. 10). The second panel shows three fundamental aspects of the large Merician family: the consecrated virgins living in the world; the Ursulines of France, strictly cloistered yet dedicated to the education of young girls; the missionaries. The following panels represent: the expansion of the Institute and its evolution up to the constitution of the Roman Union (1900), with a prominent place for the martyrs of the Terror; the opening of the missions in China, Indonesia, Thailand and Alaska; the foundation in Manchuria and, more recently, that for the expatriated children of Russia (figs. 11-14).

The four stained glass windows that illuminate the chapel were designed by Barberis himself and made by the artist Giulio Cesare Giuliani. The subjects depicted are St Peter, St Paul, St Augustine and St Charles Borromeo arranged on pedestals and framed by a geometric and phytomorphic decoration; the same motif is repeated in the other four spaces similarly arranged, where the figures of St John the Baptist, St Joseph, Paul V and Leo XIII are painted (figs 15-20).

The decoration of the chapel is completed by the lunette above the small altar to the right of the presbytery, just under the arch with the scene of the Vision of Saint Angela. The painting depicts the Madonna and Child between St Agnes and St Catherine of Alexandria. The sketch of this canvas is preserved in the Archives. (figs. 21-22). Two other sketches are kept in the archives: the left wall of the nave and the vault (figs. 23-24).

On 7 September 1937, Mario Barberis was putting away all his papers and drawings; he left some for the archives, but took the cartoon of the Virgin of Calvary with him, having carefully cut it out (AGUUR, Ge, file 3, fols. n.n.). A curiosity: the painter's beloved wife, Maria, posed as a model for the Virgin. It is thanks to the sagacity and sensitivity of the Ursuline sisters that we have, in addition to the fourteen panels of the Way of the Cross (fig. 25), of which we would otherwise have no memory except through photographs, five cartoons of the paintings in the Generalate Chapel. The five large-format graphic works depict the crucified Christ, St John the Evangelist at the foot of the cross, the Hymns of Praise (divided into two cartoons) and St Ursula in the Glory of Paradise (figs. 26-30). During the first half of 2019, the Generalate of the Ursulines of the Roman Union promoted and financed the restoration of the five Barberis cartoons.

Following the new principles of 'art' and 'liturgy' laid down by the Second Vatican Council, the Chapel now looks very different in its decoration. In the second half of 1978, the Generalate invited Sister Emilie Tschöpe osu, an art expert and artist herself, to give an opinion on the renovation of the Chapel. On 12 October 1978, the General Council decreed the work to be carried out: the "historical" wall paintings remained unchanged, and everything in the apse was removed except for the Crucifix and the figures of the Virgin and St. John. The Stations of the Way of the Cross are replaced by copper reliefs, in harmony with the style of the Chapel (AGUUR, Eb, vol. 23, pg. 86). All the decoration considered superfluous is replaced by a soft shade of brown, both on the walls and vault, and in the apse area, in harmony with the general tone of the chapel and maintaining its character of luminosity and lightness. The solution aims to maintain - and consolidate - the attention focused on the image of the Crucifixion towards which the two processions of the saints converge, as well as focusing the same attention on the new tabernacle, placed in the wall of the apse, right at the foot of the Cross, in line with the prescriptions of the Second Vatican Council, especially with regard to the liturgy.