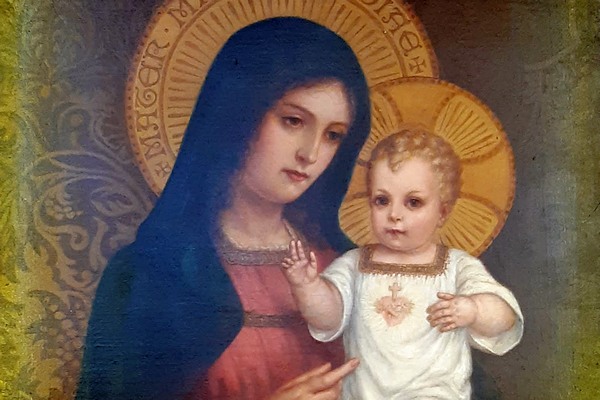 Our Lady of the Sacred Heart in Fondi 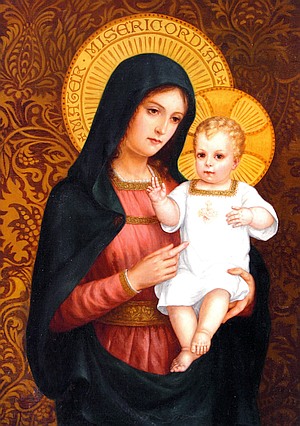 Many sisters who have lived at the Generalate or who have passed a short time there have also visited Fondi. Several have asked at different times about the painting of Our Lady in the Church of “the Queenship of the most holy Mary and St. Pius X”. Tradition has it that it was given to the parish by Mother Judith Mietzelfeld when she was Prioress General (1971 – 1983).
Sr Mariangela Mayer, present Prioress of the Generalate Community, has undertaken some research on the origins of the painting and we present the results.

Sr Mariangela and Sr Maria Letizia Usai (Province of Italy) visited the present parish priest, Don Giuseppe Marzano, on 22 February 2022. He said that according to tradition the painting came from the Ursulines but that there is no documentation in the parish.

Sr Mariangela also wrote to several Ursulines who might have had information. Their responses supported the tradition that Mother Judith had given the painting to the Church and led to some further information and hypotheses and also connections with the Missionaries of the Sacred Heart.

The Parish of Salto di Fondi

A first small church was built in 1955 by the parish priest, Father Oreste Ripoli. In the 1970s, the small structure was enlarged on land given by Opus Dei, which owned a large local farm. In the 1990s, the parish priest, Father Tullio Piacentino, began building the present church. After work on liturgical adaptations, the church was inaugurated on 28 June 2009 by Archbishop Fabio Bernardo D'Onorio. At that point, the painting was moved to the chapel on the right, where it is enthroned inside the sail of a boat, with a beautiful frame and a golden halo. 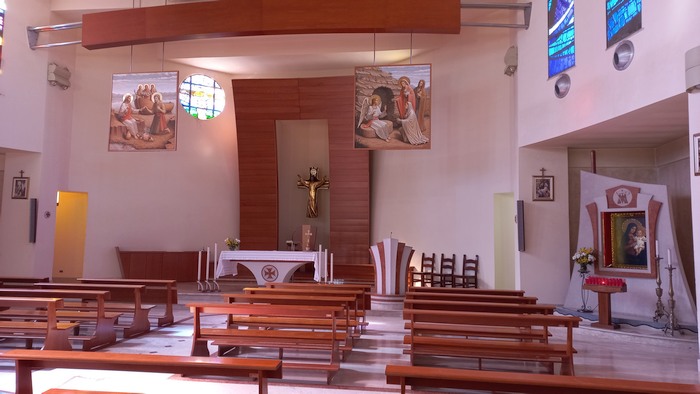 Sr Natalia Rey sent some further information from the 1970s. She arrived in Rome in 1973. “Our house had just been built there (at Fondi), and I was in one of the first groups of Ursulines to stay in this beautiful place. Every day we went to Salto di Fondi to the parish for Mass. The present church did not yet exist; there was not even a provisional chapel. The Masses were celebrated in those days in a kind of shack, very small and poor...The Sisters who were with me at the time told me that the painting of the Virgin that was there was a gift from Mother Judith…..I also know that the Generalate was modernising its chapel at that time... Later, when the temporary chapel of Fondi was built, it was there that Masses were celebrated as they were for many years, before the church was built and opened to the faithful, and this painting was hung there in the temporary chapel. Later, when the church was already built, Don Sandro, the parish priest, had it renewed and put it in a special place. He also had rosaries made with a medal reproducing the painting. ... And that's all I know. I know nothing about the painter. The date of 1914 seems to be the date of the painting. The "monograms" seem to be a signature - in those days - out of modesty - one did not sign the things one did...”

Sr Marija Jasna Kogoj, from the Province of Slovenia, had some information and some hypotheses to offer. 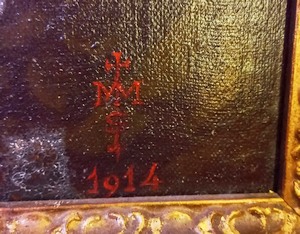 “The date on the painting takes us back to the time when Mother Angela Lorenzutti was Prioress General. She was from Škofja Loka. Her name with her predicate was “Angela Lorenzutti of Our Lady of the Sacred Heart”. Because of her predicate I suppose (it is an assumption) that the picture was given to her and thus came to the Generalate. The motif is similar to those of other of our artists.”

“In Ljubljana there was an Ursuline artist M. Mihaela Merčon (1856-1919). In her necrology, it is written that she was a good artist; among other things, she painted many pictures of the Sacred Heart for different people. “MM” could be her name (Mihaela Merčon) or Mater Misericordiae. “S” could be Srce in Slovenian (Heart) and “J” - could be Jesus. But all this is only a hypothesis.”

Fr. Armando Genovese MSC replied on behalf of the Missionaries of the Sacred Heart: “You have helped us discover an image of Our Lady present in a parish, of which we were not aware.
The picture you sent us is very beautiful, an interesting hand! Painted in oil (apparently on canvas), with all the characteristic features of Our Lady of the Sacred Heart: Mary points to the Heart of Christ, and Christ in the act of blessing points to Mary. In the child's halo is the cross, in Mary's halo is the title Mater Misericordiae, taken from the Salve Regina….. Observing the characteristics of Mary (young, white skinned), of Jesus (blond, curly) and the square necks of the clothes, it does not seem improbable to me that the artist could be the Mother Mihaela Merčon, the double M under the cross in the detail of the date could be her signature. It would also explain why she used the appellation Mater Misericordiae (MM). If this hypothesis is true, Mother Mihaela Merčon could have been a woman of great faith and endowed with excellent painting skills. A virtuous woman who left a trace not to be underestimated.”

No further information has been found either in the Generalate archives nor in the General Archives of the Missionaries of the Sacred Heart, but thanks to the memories shared by Ursulines and MSCs we do have a clearer idea of the history and of the religious significance of the painting. Thank you to all who contributed.