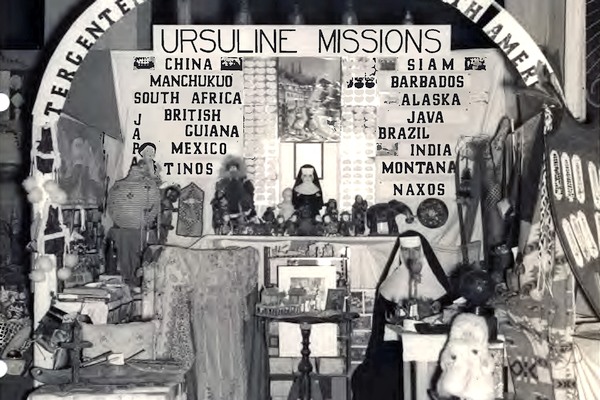 At the 9th Annual Conference of the International Council on Archives (ICA), held in Rome, Italy from 19th to 23rd September, Emanuela Lauro, the archivist of the Generalate Archives, participated with a poster.
This 2022 edition's theme sees the Archives as a means of bridging a transversal and multi-level gap. The sub-theme Emanuela chose to participate in is: Archives bridging the cultural gap.

In her poster, the text of which follows, she proposes a project for a virtual exhibition dedicated to objects from the French missions. She emphasises the missionary status of the Ursuline sisters and the pedagogical sense that has always guided the sisters in their educational apostolate. The Ursuline sisters, thanks to their capacity for integration, have managed to shorten the cultural distances with the populations they have come into contact with, always respecting their origins and cultures and finding the best way to integrate.

The objects that came from the French missions and which are now kept in Rome are numerous and diverse. Emanuela will inventory them, catalogue them and prepare them for long-term storage. And finally it will create a virtual exhibition that will be ready for the next Special Chapter (2024).

Emanuela Lauro, General Archivist – Archives of the Generalate of the Ursulines of the Roman Union, Rome
archivesur@ursulines-ur.org

«And lead a new life» said Angela Merici to her "colonels" (Angela Merici, Ricordi, 7, 1539) and with these words she invited the members of her Company to educate and to be able to interact as protagonists in the world and in history, so that their own lives might be a meaningful response to the demands and signs of the times. This high pedagogical sense has always guided the Ursulines in their educational apostolate aimed at shortening cultural distances, which finds one of the highest forms of realisation in their status as missionaries. The Ursuline Sisters have been called to bring a breath of new life to the ends of the earth, knowing how to be responsible in the midst of different people, nations and cultures, with great respect for the diversity of others, both cultural and religious, bringing with them the message of faith, hope and charity. This concept is clearly stated in the Constitutions of the Roman Union of the Order of Saint Ursula, art. 104.

Missionary activity, which began in the 17th century, has never stopped and increased during the pontificate of Pius XI, the so-called “Mission Pope”, which ideally referred to the original mandate given to the disciples (Mk 16:15).

The importance given to this vocation led to the creation of a Secretariat for the Missions, which had, among other objectives, besides internal coordination and support within the Institute, also to serve as a point of contact between the Institute and the "Centre of Liaison between the Catholic International Organisations and the World missions", and to stay informed about UNESCO's activities by following its projects and initiatives, demonstrating a willingness to bridge the gap by pursuing a model of universality.

Following the example of the “Missionary Exhibition” in the Vatican, announced in 1924 to be implemented during the Holy Year 1925, the Ursulines of the Roman Union held several exhibitions in different parts of the world and also years dedicated to their missions, of which we preserve some photographic evidence, displaying a great variety of objects from many parts of the world. The objects brought back from the missions were intended to illustrate, on the one hand, the variety of geographical, environmental and cultural contexts with which the missionaries came into contact, and on the other hand, to bear witness to the educational and integration activities carried out by the sisters.

In 2019, some 700 objects collected between the 1920s and 1960s and preserved by the Province of France/Belgium/Spain, were deposited in the Archives of the Generalate of the Ursulines of the Roman Union in Rome (AGUUR). In view of the next Special Chapter (2024), the Archives intend to take inventory and catalogue all these objects in order to create a virtual exhibition that can be shared with all the sisters of the various provinces and with anyone interested in learning about the history of the Ursuline missions through the objects.

The idea of the virtual exhibition was born in order to meet the needs of those who cannot physically visit the exhibition spaces in Rome, starting with the sisters of the Roman Union. Technology in this sense is a great help in shortening physical distances, while the role of the Archives is to share the spirit of the missionary apostolate of the Ursulines who have been called, from the beginning, to respond to the call of universality. 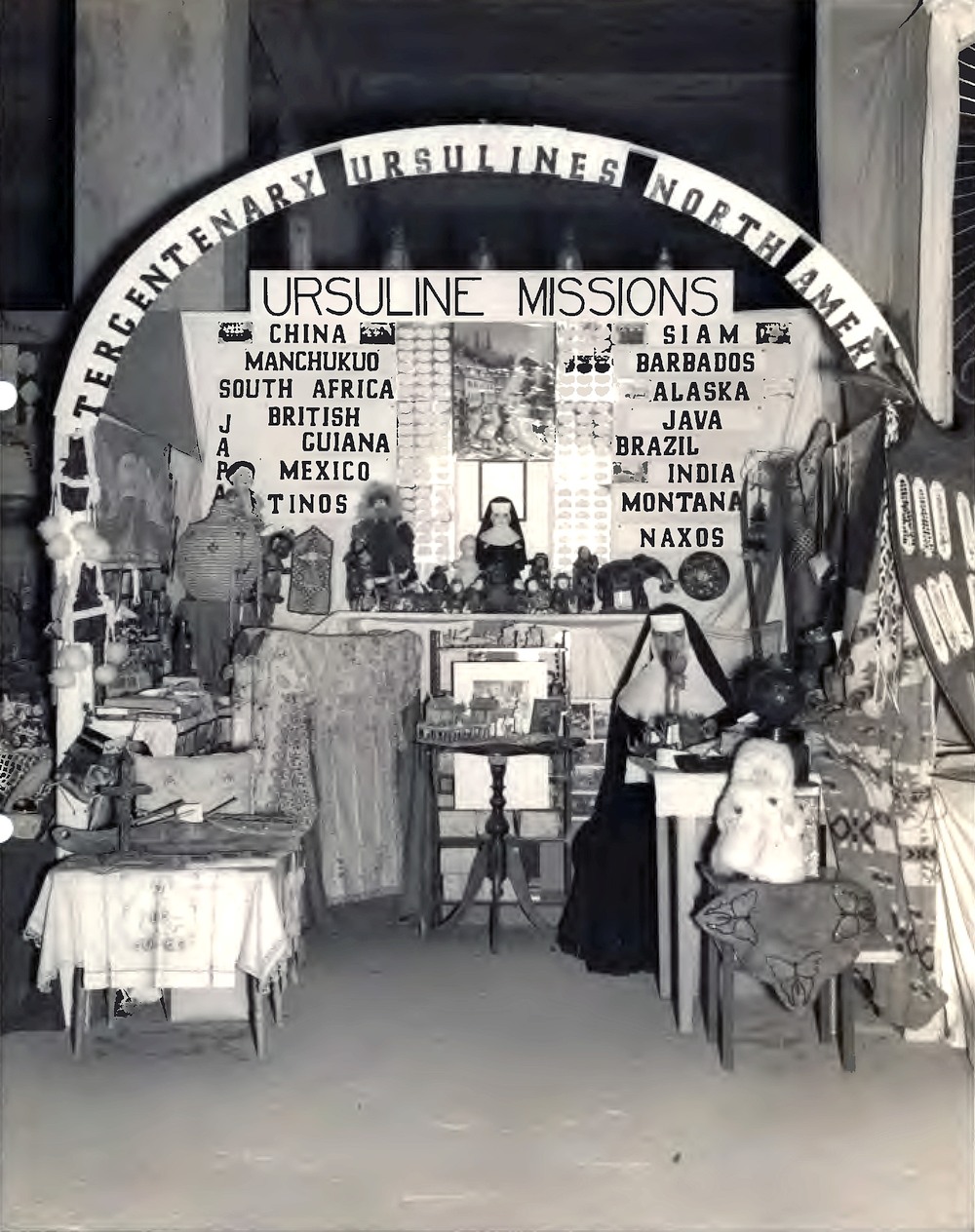 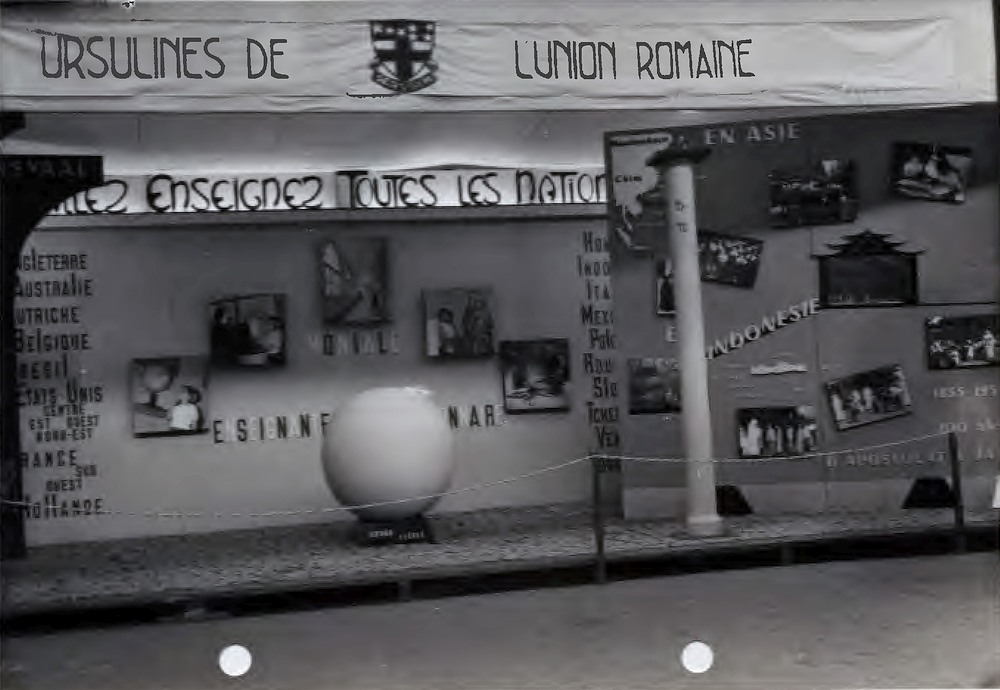 The history of the Ursuline missions is quite extensive both temporally and geographically. Here we intend to focus on the missions from which the objects stored at AGUUR come and which will be the subject of the virtual exhibition. No mention will therefore be made of the extensive US missions that took place, mostly during the 19th century; nor the missions of Australia, Mexico, Cuba, Berbice and Barbados (19th century), of India, Venezuela, Peru, Egypt, Ethiopia, Kenya and Senegal (20th century).

The Ursuline Order has the honour of having given to Christianity the first woman missionary and missionary educator. She was Marie of the Incarnation, an Ursuline from the monastery of Tours, France, foundress of the monastery of Quebec in 1639. It is easy to understand that the teaching vocation, in its expansion, results in the missionary apostolate. Marie of the Incarnation remains the great model of the Ursuline who is a cloistered nun and missionary at the same time. She was the “pioneer” of the movement, which, little by little, was going to take her sisters to the very extremities of the inhabited earth.

The artefacts that will be exhibited come from the following missions: 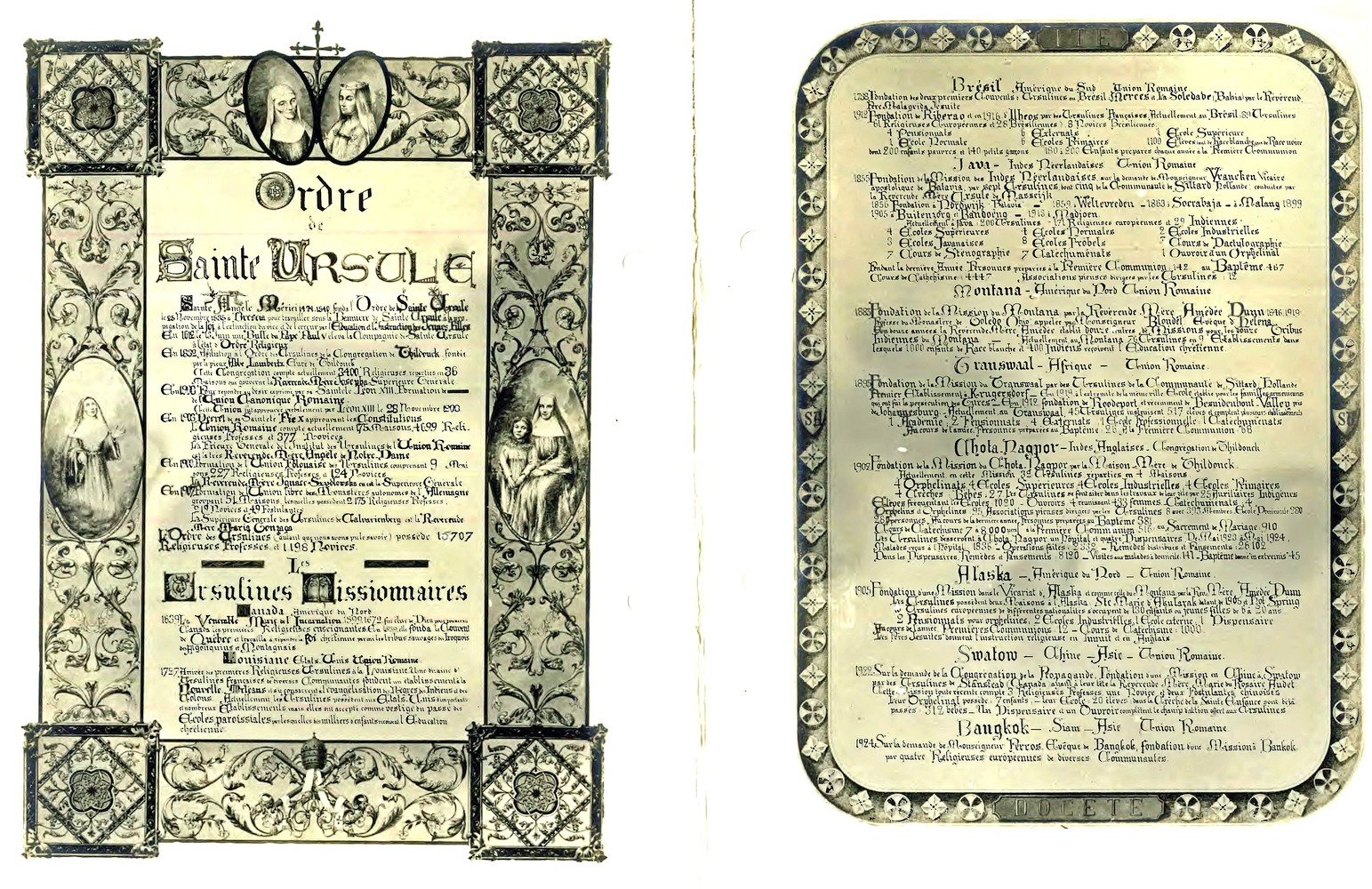 The objects collected from the missions and now kept at AGUUR are of various types and sizes, and tell the story of the missionary experience in the various countries. Many of these objects have already been exhibited in the Missionary Exhibition held in 1956 at the school establishment in Nantes, Western France. Most of the objects are representative of everyday life and customs in the host country, e.g. household and work utensils; clothing; small souvenirs. But there is no lack of graphic and/or painted or embroidered works depicting various subjects, from religious to secular. As well as a good number of sculptures made of different materials and also depicting various subjects. Very interesting is the presence of photographs, microfilms, journals, books and school works that testify to the educational mission of the Institute.

The project provides first of all for the cataloguing and inventorying of the objects divided by country and trying to follow, as much as possible, the cataloguing (inventory number) of the two previous inventories (1956 and 1995). The exhibition aims to portray the missionary experience by focusing on the great capacity for integration and bridging the cultural, linguistic and religious gap that the Ursuline missionaries were able to implement, and to testify to the foundation of the Provinces, many of which still belong to the Roman Union.

For the realisation of the virtual exhibition, the MOVIO software was chosen (https://www.movio.beniculturali.it/index.php?en/1/home) whose project is coordinated by ICCU (Istituto Centrale per il Catalogo Unico).