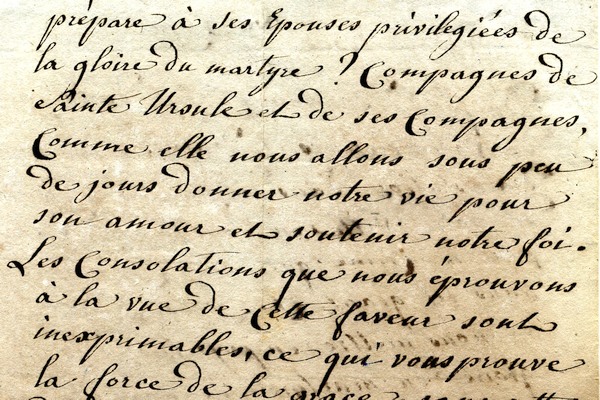 The eleven Martyrs of Valenciennes

The Martyrs of Valenciennes was a group of eleven nuns from the Ursuline monastery in Valenciennes who were guillotined by the revolutionaries in October 1794: they were beatified by Pope Benedict XV in 1920.

The leader of the group was Mother Marie Clotilde Angela of St. Francis Borgia (born Clotilde-Joseph Paillot), superior of the monastery; together with the Ursulines, two Brigittines and an urban Clarisse who had retired with the Ursulines after the beginning of the Revolution, went to the scaffold.

The events that led to the martyrdom of the Ursulines of Valenciennes began on 30th September 1790, when the commissioners of the municipality of Valenciennes, in application of the decree of constitution, came to the monastery to make an inventory of the assets and to ask the nuns if they wished to persevere in their vocation: the response of the 32 nuns was unanimously positive.

The community continued to exist peacefully until 13th September 1792, when the troops of the first anti-French coalition laid siege to Valenciennes and the monastery was requisitioned by the city's defenders. The sisters took temporary refuge with their sisters in Mons and were able to return to their monastery on 11th November 1793, after the evacuation of the revolutionary troops and the occupation of the city by the Austrians. After the French victory at Fleurus, the Austrians left Valenciennes on 26 August 1794; the town was taken over by the revolutionaries and on 1st September, the representative of the Convention, Jean-Baptiste Lacoste, ordered the arrest of the nuns.

Although the coup d'état of 9th Thermidor (27th July 1794) put an end to the period of terror, Lacoste had the guillotine erected and a revolutionary court organised.

The cause was introduced on 29th May 1907 and on 6th July 1919 the martyrdom of the nuns was recognised. The 11 martyrs of Valenciennes were beatified by Pope Benedict XV on 29th February 1920, as were the 4 martyrs of the Daughters of Charity of Arras. The eulogy of Blessed Maria Natalia of St. Louis and her four companions can be read in the Roman Martyrology on 17th October; that of Blessed Maria Clotilde of St. Francis Borgia and her five companions on 23rd October.

The Generalate Archives has, among other things, a contemporary copy of a letter written by Sister Scholastique (figs. 1-4), the text of which is translated below. The letter was given to the Archives by the Community of Mons.

Long live Jesus
From the depths of my dungeon in the prison of Valenciennes and after seven weeks of arrest in different houses of our city where we were detained for the crime we committed in taking refuge in your house, a fault which will put us in possession of the glory of martyrdom, do not pity us, but say to yourself: ah! My sisters, what have you done to deserve this favour? I say with you, dear friend, can the hardships we have suffered since we left you compare with the ineffable delights that the divine Spouse prepares for his Brides privileged with the glory of martyrdom? Companions of Saint Ursula and her companions, like her we will soon give our lives for her love and support our faith. The consolations we feel at the sight of this favour are inexpressible, which proves to you the power of grace, without this double grace we would all succumb under the weight of our sorrows. Five of us have already suffered the guillotine, they are the mothers Natalie, Laurentine, Marie Ursule, Louise and Augustine, they did not walk there, but flew to the place of torment, they went up there laughing, one of them, wanting to be executed before the others, was forced down from the scaffold and up again, she was given only a petticoat and shirt, her hands tied behind her back, we are waiting for the same destiny, I am convinced that my letter will not reach you before our death. The judgments of God being unknown to us, grant us always the help of your prayers, if they do not serve us, they will serve for the relief of those who survive us. Thérèse, Félicité, and Sister Regis are in the prisons of Douai. Clothilde, my sister, sister Cordule, the two Brigittines, and I are here, the others are not yet taken. All the priests are executed, which increases our martyrdom. To all our sisters, believe us always very grateful in Heaven. As we die, we embrace you with all our heart and recommend you to all our friends, to the parish priest and the canon.

From her words resounds a cry of joy, of happiness, of wonder at the grace granted them to receive the glory of martyrdom, faithful to the Lord until death, putting all their trust in his grace.

The bodies of the Martyrs of 17th October were buried. For more than a century, they were never found again. But in 1921, Mgr Emmanuel Dosch, the penultimate curator of the cemetery, was digging up his little garden with his grandfather, beyond the limits of what was then the Saint Roch cemetery. He realised that he was working in soil that had been dug up. But it was not until 1926 that a trench was opened there. Five female skeletons were discovered, one of which had its head turned towards the ground, clear evidence that it had been separated from the body.

A few grains of soil (figs. 5-6). from the place where the bodies of the blessed Martyrs of Valenciennes were found are preserved in the Generalate Archives (AGUUR, Bienheureuses Martyres de Valenciennes, Bh 4.16).