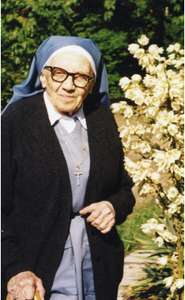 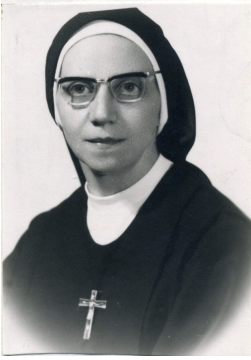 The founder of the Satyaseva Catechist Sisters of the Families Congregation (Servants of God's Truth, Catechist of Families)
Looking at the life and the activities of Mother Jolanta Woroniecka, the easiest way to describe her is as "The Missionary of the poor".
Regina Woroniecka was born in Bydgoszcz (Poland) on September 12, 1921. As an 8-year-old girl, she lost her parents and was handed over by her guardians to the boarding school of the Ursuline Sisters in Poznań. At the Ursuline school, she first gained primary and then secondary education. She passed her matura exam in Warsaw, in August 1940.
In 1943, she asked for admission to the Congregation of the Ursulines of the Roman Union and on August 28, she began the initial stage of her formation. Next, she went to Krakow, where on February 27, 1944, she was admitted to the novitiate. She was given the religious name of Jolanta. She made her first vows on March 4, 1946 in Krakow, and her final profession on March 4, 1949 in Lublin. In the convent, she completed her university studies in the field of Roman Philology, Archeology, and finally in Theology. For a year she also studied at the Academy of Fine Arts in Kraków and later, she repeatedly used her artistic skills.
Her superiors directed her mainly to educational and didactic work- she was responsible for the candidates in Tarnów, she taught sisters in Krakow (1952-1959), she was a teacher at the school in Poznań (1959-1962) and the person responsible for the dormitory for sisters from various religious congregations in Lublin (1962-1969). Later she was also prioress of the Ursuline House of Lublin (from 1965).
Even then, among her many responsibilities, she showed her special care for the poor and children from harsh environments, organizing help and care for them. In Tarnów, she opened the special after-school club for neglected children, and in Lublin her main responsibility was looking after the students. She cared not only for their material needs, but also for their human and spiritual development. She wanted to bring Christ to others and she always did so with great commitment. After many years, she wrote: "My path was, however, serving the poor." 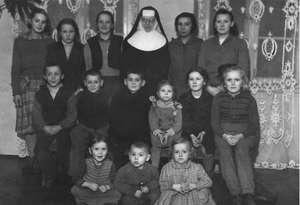 As a real daughter of Saint Angela, out of ardent concern for the salvation of souls, in 1969, she asked for the opportunity to go on missions. However, at first, her superiors directed her to one of the monasteries in Greece. In the years 1969-1971, she worked among the poor people of Athens. She also travelled to Turkey for a short time, where she hid her pastoral ministry in secret.
However, her desire to go on the missions continued to grow, and in 1971 she was granted permission to stay for one year in India. On December 12, 1971, she left for Prakashpalayam, where she started working with Polish missionaries. Seeing the great need to strengthen and deepen faith among the local, usually poor people, she was completely involved in the informal catechization of families. She treated this service as God's call and wanted to continue it. So, she decided to stay in India with special permission.

Ultimately, however, in 1974, she asked for release from religious vows. She left the Congregation of the Ursulines of the Roman Union with heartache, but she discerned her path of service to the Lord.
The sign for her was, among others, the group of young girls who were gathering around her and who wanted to live like her. 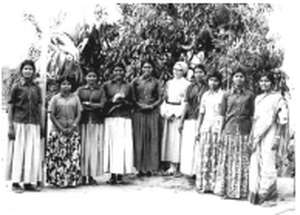 In 1976, with the consent of their bishop, they decided to live together in order to form a community, and on May 5, 1977, they moved into their first religious house in Mariapura. This date is considered to be the beginning of the existence of the new Congregation - Family Catechist Sisters. On November 11, 1980, the Church approved temporary Constitutions for them, and just after that, in 1981, Mother Regina Woroniecka made vows in this new Congregation. 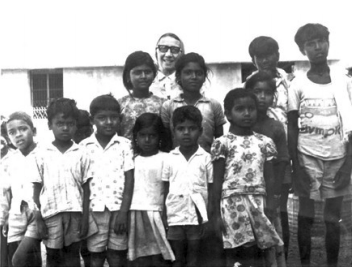 From the beginning, the Satyaseva Sisters took up work among the poorest, living in very difficult material conditions and suffering poverty.
However, Mother Regina with her commitment and perseverance in pursuit of the goal, despite numerous difficulties, won the people over. At that time her great love to the Eucharist was revealed, from which she drew strength to serve others. She often covered many kilometers on foot in order to be able to participate in Holy Mass every day.

Mother Regina never forgot about her roots. She once wrote to her school friends: "I am always grateful to our Ursuline Institute for the atmosphere of Christian faith and for the respect for our individuality, for the good school of noble feelings, culture and knowledge" (1979).
She also maintained constant contact with the Ursulines of the Roman Union. During a trip to Poland in 2003 she became ill and saw that it was time to give up her duties.

She asked for the possibility of staying at the Ursuline community in Poznań-Pokrzywno. There, she died on September 23, 2012 surrounded by sisters from two religious families.
The spiritual daughters of Mother Regina continue her work.
Currently, the Satyaseva Congregation has about 150 sisters living in 27 communities in India, Poland and Germany.

Edited by sr Iwona Naglik OSU
Translated from the Polish by sr Małgorzata Kloza OSU
Source: "Serviam". The Bulletin of the Ursulines of the Roman Union, February 2013, No. 1 (162).