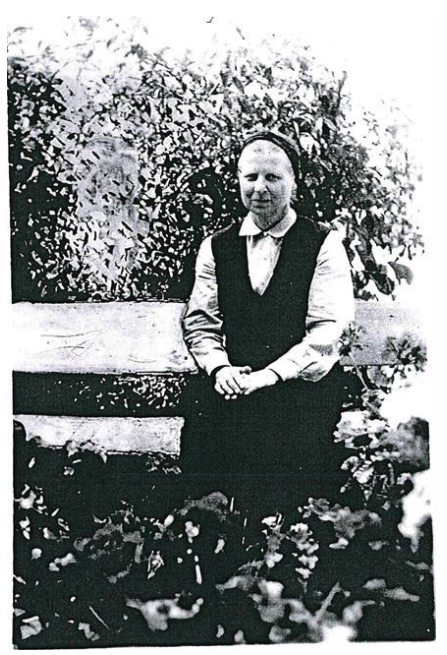 Sr Gabrielle Hadjú was born on January 8, 1915 in Csíkmadaras, Transylvania, to a deeply Catholic Hungarian family. She was baptized the very next day. In 1917, the family moved to Targu Mures, a large town in Marosvásárhely, where she attended primary and secondary school. On September 20, 1933, she entered the Ursuline Order in Nagyvárad. Two years later she was sent to Beaugency, France, to attend her Novitiate and took her first vows there on April 4, 1936.

On her return to Hungary, she resumed her university studies in Kolozsvár, then went to Budapest to obtain her degree of licentiate as a teacher of history and geography. She became a teacher at the Ursuline High School in Nagyvárad. After the dissolution of the order in August 1949, she returned to Marosvásárhely, where her family lived. She painted, gave private lessons and taught catechism. For this reason she was arrested on 1 December 1961 and was sentenced to 5 years imprisonment. She died in Nagyvárad prison on 20 April 1963 and is buried in the Kázmér Rulikovszky cemetery. In the 1970s, her body was transferred to the Várad-Olaszi cemetery, to a plot belonging to the Ursuline Sisters. Today, her grave remains unknown since the cemetery was destroyed in 1989 and a Greek Catholic chapel was erected above her grave.

Sr Gabrielle’s short biography was presented to the Holy See in the list of new martyrs of the 20th century. On 1 January 2003, the Archdiocese of Gyulafehérvár began the preliminary examination. Here are some testimonies of people who knew Mother Gabrielle.

Margit Kelemen Sz., a former pupil of the school in Nagyvárad where Sister Gabrielle taught, testifies: "We pupils loved Mother Gabrielle very much, because she was very kind, with all her love and soul, something that cannot be forgotten". "Sister Gabrielle lived only for God. She never spoke of herself. She expressed her opinion only in favour of someone... With her continually pious life and her endearing charism, she testified daily to her vocation" Matild Birtók

Sister Gabrielle has helped many families; and she has become very close to her fellow citizens and to the young people who have nicknamed her "Aunt Gabi". "It is often thanks to the help of Aunt Gabi that we have been able to overcome the dark periods of our childhood. She was the one who gathered the youth around her after the war, when convents and churches were closed and emptied. The Good Lord gave her the charisma to be able to find herself in all subjects and to help the pupils who had difficulties at school. She told us to take our difficulties as a sacrifice to the sufferings of Jesus. Let us never lose heart, she told us, and if on the ladder we reach higher, let us always turn our eyes downwards, towards those who are below and help them in their ascent. At the time I did not understand what she meant by this, but afterwards it often came back to me. Aunt Gabi always wore black clothes, perhaps she was in mourning for the dissolution of her order, for the closure of the convents. I thank God for the hours and days I spent with her" Anna Jánosi.

Sister Gabrielle, who gave her whole life to the service of others, leaves us this message: "Let us be devoted by being effaced and be effaced by being devoted, with a heart always burning with love for Jesus!